Class struggle is intensifying. We must prepare for when the bourgeoisie’s fighting wing strikes.

A confrontation is coming. One that the world has already seen many times, but that we in the U.S. will experience in a distinct way from how other countries have experienced it. This is the class confrontation, which has so far produced revolutions in Russia, China, Korea, Vietnam, Laos, Cuba, and many other countries. Conversely, when the bourgeoisie rather than the proletariat has won this conflict, it’s produced fascist dictatorships, ones that have murdered millions of people throughout Germany, Spain, Italy, Indonesia, Chile, Guatemala, and other places in order to suppress the class struggle. Whether America’s intensification of class struggle leads to revolution, or to our own version of those wildly violent counterrevolutionary scenarios, depends on how effective our communist movement will be.

I say our revolutionary crisis—should it bring either revolution or counterrevolution—will look distinct from anything we’ve seen prior because there’s no historical examples we can currently point to of a country with our kinds of contradictions undergoing revolution. The closest thing to that is Germany, which underwent a revolution in its eastern part after the country experienced imperial decline, capitalist crisis, and a suicidal fascist warfare campaign that necessitated society be built back up from the ashes. Perhaps America will undergo a comparable  process, but even Germany doesn’t have the amount of contradictions we’re faced with.

We’re a settler-colonial country, one that’s assumed the role as the center of imperialism. This is the parasitic foundation upon which American capitalism, itself a parasitic system, is built on. Capitalism here can’t survive without the continuation of extraction from the imperial peripheries, the continuation of the occupation of the Indigenous First Nations, or the continuation of our failure to give slavery reparations to the African nation. U.S. imperialism’s colonies, both external and internal, must be kept subjugated for the bourgeoisie to keep making profits.

When a system is so dependent on the maintenance of a particular geopolitical order, at a certain point it will begin to wither, and will have to take drastic measures to survive. With the last generation’s unraveling of U.S. hegemony, and the last half-century’s capitalist contraction that’s demanded neoliberal austerity to keep the system going, U.S. capitalism is in a state of unprecedented crisis. Washington is becoming less able to keep a grip over the neo-colonies, the internal colonies have been rising up with movements like Black Lives Matter, and working class peoples of all colors and nationalities are increasingly mobilizing for their rights.

Unions and strikes have been rising during the last year in particular, and millions are declining to take jobs due to how bad workplace conditions and wages are. This has prompted Bank of America to hope living conditions get even worse so that workers will have less of a choice in the job market. But even if the finance oligarchs succeed at using the capitalist state to impose further anti-worker policies (which they will), capitalism’s contradictions will be made more severe, and the people’s discontent will further grow. A vast opening is appearing for revolutionary consciousness to spread, for the workers to become receptive towards Marxism and its theory, for our cadres to find more people who are willing to commit and train.

Our ruling class sees these developments, and is doing what every threatened bourgeoisie does: become more willing to back the most reactionary, chauvinistic elements of capitalist society with the hope that these elements can successfully fight off the revolutionaries. Under our conditions, this process of fascism becoming more prominent (as in a sense fascism has already been part of America’s superstructure for generations) means a rise in settler-colonial terrorism. Our version of Germany’s Brownshirts, or Ukraine’s Azov Battalion, is fascist intimidation groups like the Proud Boys. In time, they’ll receive backup from the neo-Nazis who’ve been carrying out secretive paramilitary training during recent years. But we haven’t even needed to wait for the outward Nazis to come out and start shooting, a scenario which has happened this year with the Buffalo massacre. The white supremacists who make up U.S. law enforcement have long been patrolling our streets with growing impunity, and with ever-expanding government military aid.

In his book Dirty Truths, Michael Parenti writes that “America represents more than just an economic system. It is an entire cultural and social order, a plutocracy, a system of rule that is mostly by and for the rich. Most universities and colleges, publishing houses, mass circulation magazines, newspapers, television and radio stations, professional sports teams, foundations, churches, private museums, charity organizations, and hospitals are organized as corporations, ruled by boards of trustees (or directors or regents) composed overwhelmingly of affluent business people. These boards exercise final judgement over all institutional matters.” Settler-colonialism and global imperialist extraction are the means for keeping this cultural and social order intact, the tools the plutocracy uses to prop up this imbalanced system that wouldn’t be able to function otherwise. As long as imperialism, both external and internal, keeps capital strong, those in the core who capitalism subjugates will remain under capitalism’s dictatorship.

Capitalism is long obsolete, a zombie socioeconomic system that ceased being revolutionary in the 19th century after it mostly replaced feudalism. Since then, as capitalism has decayed and tried to beat back those who seek to replace it with the next historical stage of socialism, capitalism has created fascism as a means to wage war against the revolutionaries. The only reason why fascism hasn’t yet consumed America to the extent that it consumed Germany is that the U.S. ruling class was able to expand its imperial holdings, and to bribe U.S. workers substantially during the middle of the 20th century. Since capitalism weakened with the 1970s crash, and the bourgeoisie had to implement neoliberalism, these imperial benefits have been progressively drying up, endangering the social stability that used to let the U.S. empire be internally prosperous.

Now the system is having to eat itself at an accelerating rate, and capitalism is having to bring out its fighting wing to ever greater degrees. The waves of fascist violence that we’re seeing, from the fascists both in and outside of law enforcement, are only going to get bigger, because the system’s terminal illness is never going to start improving. It’s all one big downward spiral.

The future under capitalism is one of further living standard deterioration as the ruling class keeps imposing more austerity, privatization, deregulation, and regressive taxation to compensate for imperialism’s waning market access. The poor, which disproportionately means the internal colonies, will be pushed into an even more desperate situation, the police and the fascist paramilitaries ready to massacre them if they try to fight back. The American fascist movement will tap into the remaining elements of the labor aristocracy, the well to do settlers who are most materially tied to colonialism’s continuation, in order to build up their counterrevolutionary army. This movement’s demagogues will promise these favored sections of the population that they can regain America’s former prosperity if they fight for a revamped colonization project. We could indeed see a repeat of Germany’s “Lebensraum” campaign to annex land so the master race can get what it believes it deserves. The factor that could prove American fascism more easily defeatable is that here, there are colonized nations which have been fighting for their autonomy for centuries. White proletarians must act in solidarity with these nations to have hope for defeating the fascists. 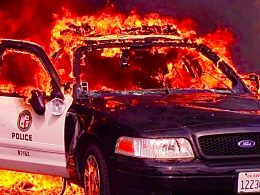 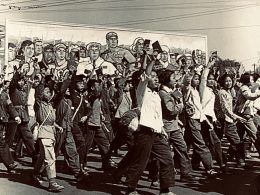 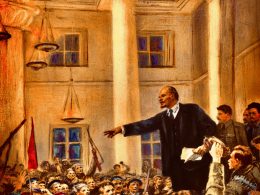