The decline of U.S. hegemony is a pivotal step towards the end of capitalism

When we talk about the decline of U.S. imperial hegemony, we’re not just talking about the fall of one empire. We’re talking about the disappearance of imperialism as a historical phenomenon. Because the U.S. and its allies are the only modern imperialist powers, as is demonstrated by a Leninist analysis on the notion that Russia and China are imperialist. And when Washington fully loses its status as a superpower, a scenario which recent events have brought far closer, the power it holds won’t be transferred to another Euro-American power, like how the British empire’s influence got handed over to Washington. The holdings of the imperialist powers as a whole will be vastly diminished, and unable to be recovered.

In his book In the Shadows of the American Century: The Rise and Decline of US Global Power, Alfred W. McCoy predicts that the power vacuum left over in the ruins of Pax Americana will be filled by “a coalition of transnational corporations, multilateral military forces like NATO, and an international financial leadership self-selected at Davos and Bilderberg” that will “forge a supranational nexus to supersede any nation or empire.” If one subscribes to the doomerist view of history which can come from not understanding that capitalism is only one stage in civilization’s evolution, they might interpret McCoy’s analysis as an affirmation that imperialism will continue regardless of how much influence Washington loses. This is the kind of conclusion that’s invariably come to by those who believe Washington’s rivals are also imperialist: when the current hegemon falls, the epicenter of capital will merely relocate to somewhere else, and maintain its exploitation of the formerly colonized world.

When one properly understands the current state of global markets and geopolitics, in which Russia, China, and Iran are not “core” but rather semi-peripheral, it becomes apparent how threatened capitalism’s future is at this point. Accepting the Leninist analysis on the socioeconomic nature of these countries makes it possible to reject Washington’s self-projecting propaganda about what these countries have been doing; Russia’s anti-fascist military intervention isn’t an act of imperialist aggression, China’s Belt and Road Initiative isn’t neo-colonialism but in fact neo-colonialism’s antithesis, and so forth. And when the anti-imperialist role of these countries becomes clear, a more accurate vision of the world’s future comes into focus. A vision that’s vastly more optimistic than the doomsday anticipated by those who expect civilization to utterly collapse under capitalism.

Civilization will survive, because capitalism—and by extension capitalism’s survival tool of imperialism—is not immutable. It’s an increasingly decrepit system, one that’s only been able to last so long because of its reliance on imperialist parasitism. Since the beginning of the New Imperialism in the 19th century, which saw the transition from imperialism consisting of exporting goods to consisting of exporting capital, capitalism has been in a decaying stage. A stage where it’s no longer been a revolutionary force, fighting to supplant the decaying old feudal model, but a reactionary one, fighting against the threat of socialism supplanting capitalism.

To succeed at delaying its extinction up to now, it’s needed to extract from the peripheries to bribe a comfortable minority of the workers in the imperialist countries, who’ve made up the labor aristocracy. To keep the rest of the imperial center workers from rising up, and from allying with the workers in the neo-colonies, the bourgeoisie have had to wage an intensive counterinsurgency against radical organizing. An insurgency that’s depended on undermining international proletarian solidarity by promoting anti-communist, pro-imperialist psyops, the Xinjiang genocide hoax being a recent example.

When a socioeconomic order needs to rely on parasitism, warfare against defiant countries, a cycle of endless growth that inevitably crashes and makes austerity necessary, bribery of a small global segment, and lies, it will run into the kind of crisis capitalism is experiencing now. A crisis where ever more of the world is turning against imperialism due to imperialism going against the world’s interests, and where the workers even in the core are increasingly mobilizing to gain their rights. Why is Amazon run like a dictatorship where workers are encouraged to inform on each other for trying to unionize? Because for Amazon and the other monopolies to survive, the potential for an explosion in class struggle must be suppressed. The self-consuming process that capitalism has been undergoing during the neoliberal era, where the proletariat in the core gets exploited with increasing intensity, must not be interfered with. Eating itself is the only way capitalism can keep itself functional at this stage, when imperialism’s benefits are drying up and the neo-colonies are increasingly breaking from imperial control.

This self-cannibalizing nature of today’s capitalism is also visible in Europe, where Washington’s imperialist satellite states have been sacrificing their own people to assist in the Russia sanctions. This hybrid war only has the support of those who benefit from imperialism. The peripheral countries have refused to condemn Russia’s intervention, and a mass base of support for Operation Z exists among the peoples of these countries. So the imperialists are forced to make those in the core take on more of the costs of the economic warfare efforts, creating an energy crisis that’s going to damage Europeans more as they go into the next polar vortex winter.

The sanctions are more generally being used to justify assaults against working people, the gas companies carrying out price gouging as wages and social services fail to compensate for the harm being done by inflation. The people are being forced to bear ever more of the costs of capitalism’s crisis, and of the imperial decline that’s tied in with this crisis.

The restoration of unity that the pro-U.S. bloc experienced after the Ukraine war started, where the inter-imperialist disputes they had been undergoing in the previous several years were momentarily put aside, represented the last time the 20th century world order will be able to resemble its old structure. This unity is now deteriorating, the European countries growing wary of continuing to participate in the sanctions because of how grievous the costs are. This problem is due to the same globally destructive policies imperialism has brought. Because the imperialists have torn apart Libya and Yemen, two of the major countries Europe seeks to loot in order to make up for no longer getting Russian oil, their access to the resources of these countries is limited.

The U.S. occupation troops continue to steal Syrian oil, but that doesn’t solve Europe’s problem. Neither does the fact that U.S. oil companies are greatly benefiting from the Russian oil cutoff. However much the U.S. empire is able to profit from the resources of the stolen indigenous lands in its internal colonies, if it can’t maintain its global power, its capital will ultimately have to contract. Which the splintering of the imperialist bloc, and the crippling of the effort to destabilize Eurasia, will make all the more unavoidable. If the imperialists can’t make this war damaging enough that they manage to weaken and balkanize Russia, then they won’t be able to subdue China. And if they can’t subdue China, the process of neo-colonialism’s extinction will be able to continue unabated.

Because the imperialists can blunt China’s rise by meddling in potential new BRI countries, but this won’t change the fact that the BRI is the practical option for the Global South. And as long as China remains a superpower, Washington can’t stop the world from turning towards China as an alternative to what Washington offers. That being a bleak future, where the IMF imposes ever more austerity, privatization, wage cuts, and deregulation onto an already destitute global working class.

When the transnational alliance McCoy talks about forms, it will be left with a diminished and shrinking access to the markets imperialism requires in order to continue. The United States, imperialism’s former greatest asset, will have become an isolated fortress state that’s struggling to control its own people, even more than it is now. And the new hub for imperialism in western Europe won’t simply be able to redo the colonization project that made it rich. The formerly colonized world will largely have the economic capacity to reject neo-colonialism, both due to the BRI and due to a likely new wave of Global South revolutions. The riches that Europe and its partnered imperialist settler-colonial states have built up will keep disappearing, until the proletariat in the core countries can no longer take it. Then revolution will come to these countries as well, and capitalism will be shrunken enough in its power that the bourgeoisie can only keep getting less relevant as a class.————————————————————————— 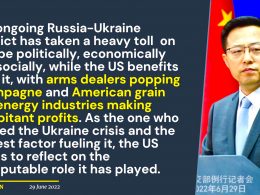 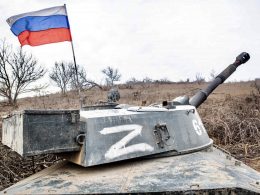 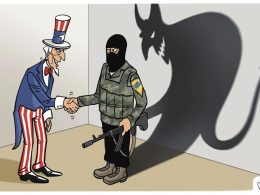 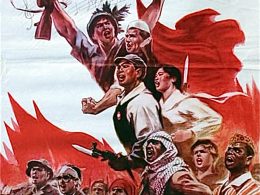 The pitch that the U.S. empire makes is one of a shared conquest. Or, to put it more…
byRainer Shea