Haiti invasion is a testing ground for U.S. imperialism’s conduct in the age of climate collapse

The “intervention” in Haiti that the U.S. is using false “humanitarian” pretenses to gain international support for is a fulfillment of the prediction which a 2019 Pentagon report made: that as climate disruption intensifies, Washington will carry out military operations in the places which are most impacted. The report, titled Implications of Climate Change for the U.S. Army, emphasizes the risks that climate catastrophes pose towards Washington’s strategic interests, implying that these crises could prompt populations to revolt against leaders in peripheral countries who the U.S. favors:

The DoD is unlikely to dedicate significant resources to better preparing the force for humanitarian and disaster response (HADR) missions. However, it should analyze areas where climate change events are likely to exacerbate other political, economic or social issues and where the scale of the potential human migration will tip the balance toward conflict and mass humanitarian strife. In other words, those areas where the United States will be compelled to respond. After an analysis to determine those areas at greatest risks, the Army should develop a campaign plan-like approach to mitigate future risk and to set conditions for a more suc- cessful response, if necessary.

Around the time when this report was put out, during the 2019-2020 legislative cycle, the U.S. Congress introduced a law designed to codify such a practice of militarily intervening in response to climatic disasters. Called the Global Fragility Act, it’s presented as a way to get humanitarian aid to victims of the world’s growing instability. But an imperialist state does nothing out of pure altruism, its entire existence is about advancing profits for monopoly capital. And the Act’s language about ensuring U.S. influence within the countries it “helps” is a euphemism for political meddling in order to maintain neo-colonial extraction. A paper by the United States Institute of Peace, a congressionally funded entity whose goals align with the Global Fragility Act’s “humanitarian” type of imperialism, talks about how Washington can use the Act to maintain its grip over the targeted countries:

Realizing the policy’s ambitious vision for a more peaceful and stable world, however, will require not only the new investments in peace and stability provided by Congress for this initiative, but also innovative diplomatic and programmatic efforts on the ground in the affected countries. The new policy advances the Global Fragility Act (GFA), an ambitious U.S. law that makes preventing conflicts and promoting stability in countries prone to widespread violence or conflict a U.S. foreign policy priority. The legislation outlines peacebuilding lessons learned that federal agencies should adhere to, including better aligning U.S. diplomatic, development and security efforts, deepening cooperation with our international allies and partners in fragile states and designing more nimble approaches that engage civil society.

With this latest invasion of Haiti, we’re seeing what those ideas look like when put into practice. The U.S. has exploited the impacts of the climate crisis on Haiti, especially the cholera virus that global warming is exacerbating, to gain United Nations support for its operation to forcibly maintain Haitian neo-colonial governance. All Washington has had to do is use the right rhetoric about aid to the suffering and ensuring “peace,” and even less reliable neo-colonial assistants like Mexico’s president have backed the U.S. in this scheme. These dishonest actors say the operation is merely about helping the people, but it’s truly about propping up the regime of Ariel Henry, the U.S. asset who was installed as Haiti’s president last year.

There’s a reason why big tech has reacted to the most widely viewed statements about this being an invasion by adding disclaimers insisting that the term “invasion” is misleading. In a post-Iraq invasion era, imperialism’s narrative managers can’t allow the American public to perceive that their government is repeating its infamous errors from Vietnam, Iraq, and Afghanistan. This can’t be seen as an invasion, that word is toxic now. It can only be viewed through a euphemistic lens, can only be seen as the exception to Washington’s rule of respecting sovereignty.

A look at the violations of international law that the U.S. military continues to carry out shows how absurd this narrative is. To advance its cold war against China, Washington is expanding AFRICOM, a modern version of the old colonial occupations. It’s doing the same in the region surrounding China itself, and in Latin America. It’s still occupying northern Syria in order to steal Syria’s oil. It’s continuing its drone warfare in Somalia and other countries, to the effect that it’s having to undercount the number of civilian casualties to soften the blowback.

To portray its aid to Ukraine as justified, Washington has to make itself out to be a guardian of “sovereignty” and “human rights.” A claim which the peripheral countries don’t accept, due to their having been on the receiving end of U.S. aggression for the past century or so. For this reason, only Washington’s fellow imperialist powers are going along with the sanctions against Russia. The vast majority of the globe recognizes the U.S. as hypocritical in its appeals to “defend Ukrainian sovereignty,” which itself is a cover for defending the ultra-nationalist state that a U.S. coup brought to Kiev in 2014.

When the U.S. empire has permanently lost its credibility as a power worthy of being the world’s police, its campaign to exploit the climate crisis can only go so far. The Afghanistan and Iraq invasions irreparably destroyed the globe’s trust in Washington. By deciding to intervene in every peripheral country that’s at great risk from the climate crisis, Washington is opening itself up to even greater blowback. Bangladesh is another country that could soon be invaded, as indicated by how it’s named as a climate risk hotspot by the 2019 Pentagon report. The island nations at risk of vanishing due to sea level rise, the other Latin American countries at growing risk of collapse, and dozens more locations could soon see their people subject to Washington’s violence, whether in their own countries or in the countries that will soon be flooded with their refugees.

As climatic disasters multiply, so does the potential for American militarism to become overextended. The 2019 Pentagon report covers this fact extensively. And should the U.S. decide to jump on every crisis as an opportunity for invasions to preserve its neo-colonial regimes, these regimes will ultimately grow more unstable. Because governments kept alive by blatant foreign meddling are instantly recognizable as undemocratic. Washington can’t hold onto its neo-colonies simply by sending in the army to repress the global working class, that will turn into a new version of the 20th century’s anti-colonial revolutions. Except now with an explicitly socialist character.

The complicity that supposedly leftist governments like Mexico’s have in U.S. militarism is not going to save neo-colonialism. When the peripheral countries come to stand on their own feet economically, they’ll become no longer able to be exploited, and U.S. capital will be weakened. Thanks to China’s Belt and Road Initiative, this process is underway when it comes to economically growing peripheral countries like Ethiopia. When U.S. capital loses enough of the extractive sources which keep it strong, proletarian revolution in the core will become more viable. Should we in the core do our part in the global class struggle, vulnerable countries like Haiti will no longer be subject to the efforts of foreign occupiers to deprive them of self-determination. The global proletariat’s victory doesn’t hinge on what the traitors and neo-colonial lackeys do. They’ve already chosen which side of history they want to be on. The working class will discard its enemies and embrace its friends as they continue to come along. 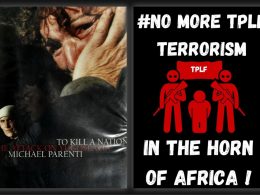 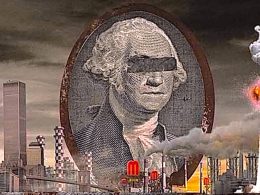 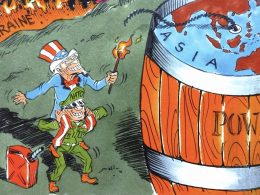 U.S. imperialism sees every person on the planet as expendable, including the people within the U.S. itself. It’s…
byRainer Shea