In the midst of the threat of Roe V. Wade being overturned, and abortion being automatically banned in 13 states within the next two months, the calls from liberals to vote come across as totally vapid. This is because over the last several decades, we’ve seen dozens of times what happens whenever Democrats become the dominant party: they fail both due to their own lack of principles, and due to the reactionary nature of America’s political structures. Because of this, the paradigm is pushed further towards fascism regardless of which party is in charge. In the present moment, where U.S. hegemony is in decline and capitalism is the most unstable it’s ever been, this dynamic is intensifying.

Only around a year after Biden’s inauguration, which was celebrated by liberals as one of history’s great triumphs due to it having displaced Trump, the worst strains of reactionary evil are ripping through the country’s institutions. They’re able to pass growing lists of inhumane policies that parallel those of today’s most internationally alarming far-right regimes, like the ones in Poland and Hungary. There are bans against teachers talking about all gender identities or sexual orientations other than the cisgender, heteronormative ones that settler-colonialism has made dominant. Schools are banning books, likely soon to number in the thousands, primarily to advance the Republican Party’s goal of suppressing the ongoing history of institutional racism in this country. In addition to what the Supreme Court’s decision on Roe will bring about, over 500 anti-abortion bills have already been considered within state legislatures so far this year.

The targeting of the LGBT community is what especially makes our situation mirror the one in Poland, where many localities have implemented “LGBT free zones” which symbolically codify religiously motivated exclusion and therefore encourage hate crimes. In the U.S., we’re reaching that point through a growing wave of attempts to destroy LGBT rights. NBC News reports that “State lawmakers have proposed a record 238 bills that would limit the rights of LGBTQ Americans this year — or more than three per day — with about half of them targeting transgender people specifically….the annual number of anti-LGBTQ bills filed has skyrocketed from 41 bills in 2018 to 238 bills in less than three months of 2022. And this year’s historic tally quickly follows what some advocates had labeled the ‘worst year in recent history for LGBTQ state legislative attacks,’ when 191 bills were proposed last year.”

The far-right Supreme Court Justices that Trump installed won’t just be able to make abortion illegal in many more places. They’ll be able to make these anti-LGBT laws, and any other given legislation targeting human rights, far easier to enact. For the settler-colonial chauvinists driving the anti-abortion movement, the central argument is that no part of the U.S. constitution talks about abortion, making protection of abortion unconstitutional and therefore anti-American. This will be the rationale they’ll use to try to overturn Roe V. Wade, which will open up limitless potential for going after other civil and human rights protections that they decide go against the values of “America.” Next could come voting rights, which were already turned back a decade ago with the 2013 decision to force disenfranchised voters into having to try to prove they’re discriminated against. This was a treatment of systemic racism that echoed the current rhetoric decrying “critical race theory,” where the very notion of discrimination is portrayed as treasonous propaganda. Or maybe gay marriage will be targeted next. With the likelihood of either Trump or the more competent fascist Ron DeSantis winning the presidency in 2024, any further reactionary policies are plausible.

It’s long been easy to predict this. “The ruling ideology of neoliberalism, the ruling elites recognize, has been discredited across the political spectrum,” wrote Chris Hedges in 2019. “This is forcing the elites to make unsavory alliances with neofascists, who in the United States are represented by the Christian right. This Christianized fascism….[in] its most virulent form, [is] one that will be expressed once the economy goes into crisis….[and] will seek to purge the society of those branded as social deviants, including immigrants, Muslims, ‘secular humanist’ artists and intellectuals, feminists, gays and lesbians, Native Americans and criminals—largely poor people of color—based on a perverted and heretical interpretation of the Bible. Abortion will be illegal. The death penalty will be mandated for a variety of crimes. Education will be dominated by white supremacist views of history, indoctrination and the teaching of creationism or ‘intelligent design.’ The pantheon of new American heroes will include Robert E. Lee, Joseph McCarthy and Richard Nixon. The state will portray the white majority as victims.”

Why has Hedges been proven so right, with the emergence of such policies occurring right alongside the economy’s deterioration? Because that’s how capital works. When it produces crises that get out of the control of the bourgeoisie, and the masses gain potential for radicalization, the bourgeoisie embrace fascism.

Every vile aspect of our current reality is connected. The stagnation of wages that’s caused millions to effectively go on permanent strike by choosing unemployment over intolerable exploitation; the erosion of civil and human rights; the explosion of hate crimes and white supremacist terrorism fueled by paranoid conspiracy narratives; the ongoing militarization of police and increases in the military budget; the completion of a border wall that exists on unceded Native land and increases violence against imperialism’s victims to the south; the proliferation of homelessness and crippling debt that crushes the working class; the institutional vulnerability to crises like pandemics or global warming; mass drug addiction that was created for pharmaceutical industry profits; the growth of inequality both within the core imperialist countries and globally; the concentration of monopoly power into conglomerates like BlackRock; the propagation of warmongering lies by a media that’s only concerned with helping the military-industrial complex; the raising of prices on consumer goods that we’re told is crucial for advancing “freedom” because it serves the Ukraine war effort. It can all be traced to the implosion of capitalism, and to capitalism’s consuming itself in response.

What comes from this is a vast machine that only keeps itself running by expanding destruction and suffering, and that doesn’t produce anything of value. In Latin America alone, the number of people living in extreme poverty has risen by 5 million throughout  the pandemic, making for close to 90 million in the region who are now destitute. All this so that billionaires could take a trip into space, made possible by the extracted wealth from the Global South. The United States has provoked Russia into intervening in Ukraine, and is now funneling weapons into the hands of a corrupt fascist-adjacent Kiev regime so that war can be perpetuated within the country. The U.S. has also sabotaged the living standards of its own people by imposing sanctions that have backfired on our economy. All for the profits of the weapons contractors, and so that Washington can try to weaken Russia within the geopolitical game of chess. The same applies to global warming, and Covid-19, and crime, and every other evil the system exacerbates. Capital is perpetuating cycles of destruction just to prolong the lifespan of a long-obsolete socioeconomic order.

Fascism is one of these evils that late-stage capitalism is reinforcing in exponential proportions. And as always, the evils are connected. To facilitate its proxy war in Ukraine, the CIA has been fostering neo-Nazi terrorism within the country. This has provided an opportunity for white supremacists around the world to gain combat training, going to fight in the war and then returning home. The propaganda that the imperialist media puts forth glorifying Ukraine’s neo-Nazi militias, and the regime which enables them, helps Nazism as well. These actions will have consequences, those being a strengthening of lone wolf white supremacist violence and fascist paramilitarism in the U.S. Which will provide a network of terror to support the fascist movement that’s gaining traction. 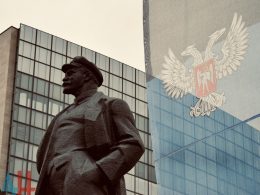 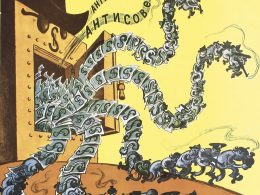 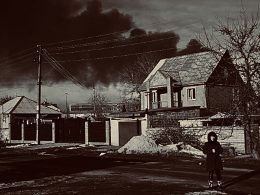 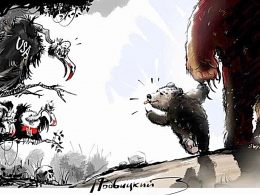 Is imperialism Russia’s motive for intervening in Ukraine? Given that Russia is a capitalist state, and imperialism is…
byRainer Shea